In the Middles Ages, there was more red produced than white but things changed when the Germans arrived and brought their own cuisine – smoked, salty meats, cabbage, pork – foods that paired better with whites. Over the last 20 years though, there’s been a revolution by the new generation, helped along by climate change, that is planting and producing more Pinot Noir. Currently, only 10% of Alsatian wines are red, and only 25% of the wines are exported (vs. about 50% for Bourgogne Pinot). They hope to change that.

Vineyards on the Edge of Faults

Alsace is fascinating to me because it’s not very far from Bourgogne (by a Californian’s standard) and they are both ribbons of vineyards created by the Alpine lift during the Tertiary period. But in Alsace, faulting on the slopes of the Vosges was more complex, creating much more diversity in soil types than in Bourgogne which is defined by various limestones and clay. In Alsace, there are 13 different soils such as granite, limestone, marl, clay, sandstone and volcanic, each lending a unique character to the wines. Both Bourgogne and Alsace are protected to the west by the mountains, more so in Alsace where the Vosges mountain range creates for Alsace the driest climate of all French wine regions, facilitating about 20% of vineyards to be farmed organically or biodynamically. These sunny and dry conditions are ideal for ripening Pinot Noir in this northerly region. 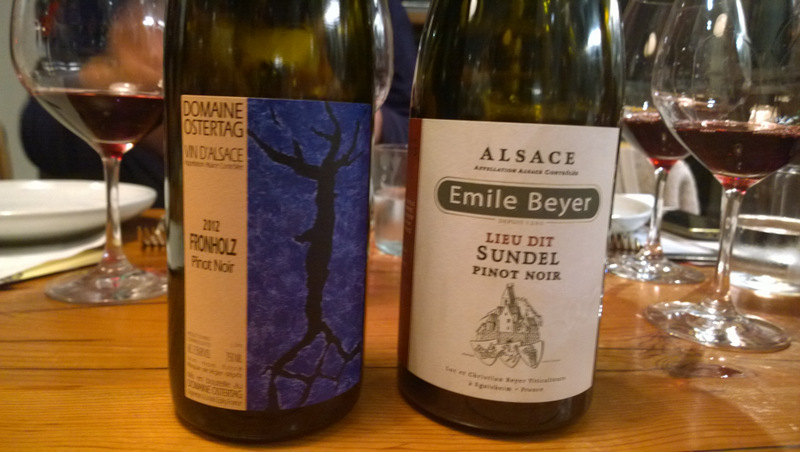 The Bourgogne Concept of Terroir Translated

In Bourgogne, there are nearly 700 official single vineyard AOC wines, mostly 1ers Crus and Grands Crus. In Alsace, there are 51 single vineyard AOCs which only received official status as stand-alone Grands Crus in 2012, but it’s not for lack of terroir. In Bourgogne, the notion of single vineyard ‘climat’ not only encompasses the unique physical terroir, but the history and role of generations of families in expressing the terroir. I found that soul in some of the wines we tasted that night like the Emile Beyer Pinot Noir Sundel 2012 ($50) imported by Michael Corso Selections. Christian Beyer and his wife Valerie are the 14th generation of the family domaine to make wine, with Christian getting a well-rounded, modern education at vit school in Beaune and experience in Rheingau and Bordeaux. Sundel is a lieu dit located in the Grand Cru Pfersigberg (there’s currently no Grand Cru designation for reds but they’re working on it). It was fresh, mineral, well-balanced and finely textured. The cuttings came from 1er Cru Epenots in Pommard and the wines were made in the traditional way. There’s no denying the finesse of reds grown on limestone soils but I also loved the Ostertag Pinot Noir Fronholz 2012 ($48) imported by Kermit Lynch. Those grapes were grown on a combination of white sand, quartz, clay and marl. Lots of black cherry fruit, a little spice, fine tannins, with good depth and finish.

If he had to compare Alsatian Pinot Noir to Bourgogne, Thierry thought it was more Cote de Beaune than Nuits, due to the similar clays. A little fresher and lighter. These qualities made the beautiful wines great to enjoy with the simple but delicious, ingredient-driven dishes at Octavia. 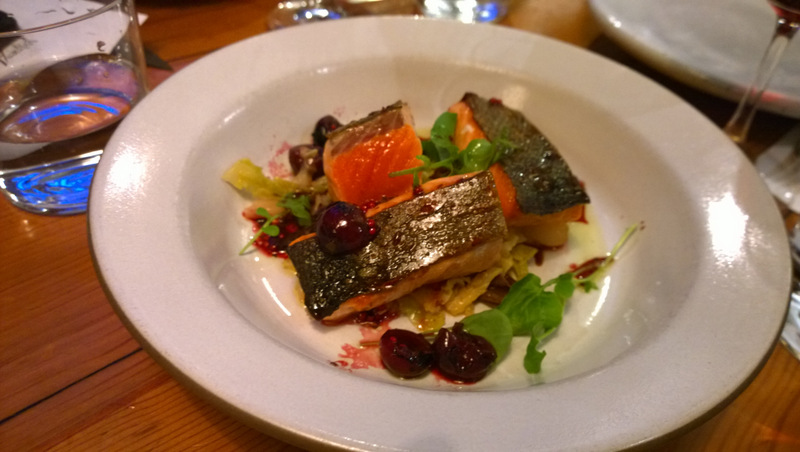