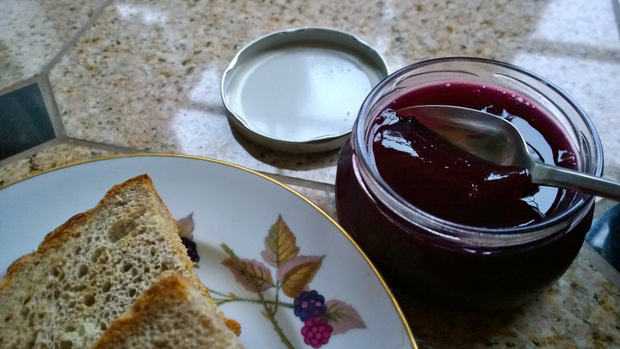 The 2016 Napa Harvest is underway. At home, I hand-harvested my own single-vineyard, dry-farmed Zinfandel grapes last week and wanted to make a jelly with a little more distinction and less sugar than most. So I thought like a winemaker. I fermented them.

The young vines were purchased in 2013 at the Zinfandel Advocates & Producers annual Zinfandel Experience Grand Tasting in SF, the next fest coming up February 23-25, 2017. Being clone 6 on high-vigor, drought tolerant Dog Ridge rootstock, the vines produced attractive fruit by the second year. This is my third vintage.

After hand-destemming the clusters into a 6-liter bucket, I lightly crushed the unwashed berries, leaving some whole, then covered it. The valley is filled with ambient wine yeast, so the must began to ferment naturally by the next day. I decided to leave it at room temperature for three days – not too long, or else much of the natural sweetness in the grapes would be consumed by the yeast. It was long enough however, to extract color, flavors as well as some pectins from the skins which would allow me to use less sugar as a thickener later on.

After three days, I poured the entire lot into a big pot, brought it up to a boil and let it cook for 10-15 minutes, then strained it through a cheesecloth-lined, fine mesh colander. 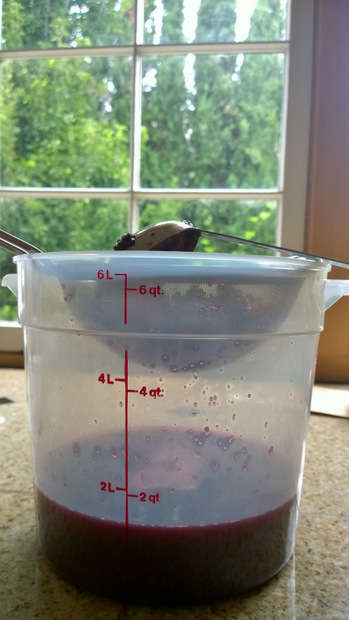 The yield was nearly 6 cups of Zinfandel juice. Per the instructions in the box, I mixed the 1 – 3/4 oz. packet of dry pectin* with a 1/4 C. of sugar and stirred it into the cooled juice to disperse, then brought it up to a boil and let it cook for 1 minute. I then added 2 1/4 C. sugar, let it come to a full boil and let it cook for another minute, stirring constantly, then pulled the pot off the cooktop and skimmed off the foam. The warm jelly was then ladled into prepared jars and processed via the easy water bath canning method.

The jelly came out exactly how I wanted, shiny and firm but still a little jiggly. The flavor was bright but rich and very pure. I’d say I used about half the amount of sugar than most grape jelly recipes with delicious results.

*Note: I used Sure Jell Premium Fruit Pectin For Less or No Sugar Needed Recipes.