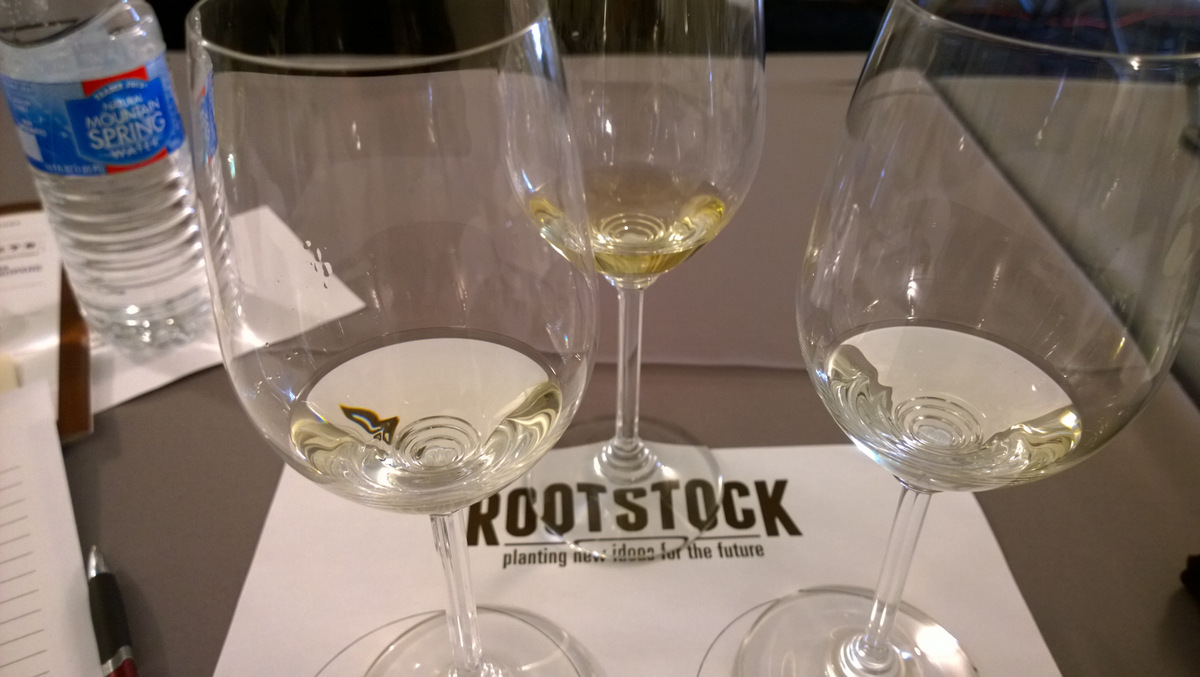 There were a fascinating number of sold-out tastings and educational seminars at Napa Valley Grapegrowers‘ inaugural Rootstock Symposium in Napa, but the ones I was most keen to attend related to water and wine quality. We’ve had three consecutive years of drought now in the Napa Valley and hopes for a wet El Nino season this year are fading fast. Even with moderate to above-normal rainfall, it hardly quenches our depleted reservoirs and aquifers. At RootstockNapa, researchers, winemakers and viticulturalists weighed in on conserving irrigation water without sacrificing quality.

Dr. Anita Oberholster of UC Davis gave a presentation on the effects of using recycled winery water to irrigate Sauvignon Blanc vines, illustrated by a comparative tasting of two wines from Alpha Omega‘s vineyards. Both wines were made using the same clone UCD 1 planted on 1103P rootstock in Clear Lake clay series soils, but one plot was irrigated with well water (the control wine A), the other plot with recycled water, wine B. Each wine was made in the same neutral manner so as to make the comparisons as accurate as possible.

The wines were tasted blind. For me, Wine A was more restrained but had nice length. Wine B expressed more purity of fruit, freshness and finesse.

In the final analysis, there was little difference in the chemistry between the two wines, the slight differences in alcohol and TA being attributable to one plot being harvested at 2 degree higher brix. While the recycled water contained more sodium, which could negatively impact soil structure and pH balance in the fruit, according to Dr. Oberholster, Napa Valley vineyards are so minimally irrigated that it had little affect. Furthermore, sodium is also not as easily taken up by the vine.

As a consumer and conservationist, I was pleased with the results. Wine B was made with Sauvignon Blanc irrigated with recycled water.

UC Davis is conducting ongoing research on recycled irrigation water at Francis Ford Coppola, this time studying the effects of potassium-rich (vs. sodium-rich) practices on the water, soils and vines of two vineyard plots. This will be interesting to follow as potassium is more readily taken up by the vine and, while being a more expensive protocol, its use is apparently becoming more popular among vintners.

Another interesting seminar at RootstockNapa was moderated by Napa Valley legend Warren Winiarski, “Mastering Balance and Vineyard Expression Through the Acidic and Phenolic Makeup of a Wine”. A common thread throughout the discussion was how the winegrowers limit the use of water while achieving expression in the wine.

Mary Maher, Harlan Estate Vineyard Manager, said that they work really hard to get the roots deep into the soils, and water less, to capture the individuality of the vine. Caleb Mosley of Huneeus, formerly with Araujo and Ridge, precision irrigates to balance the fruit, for example, dealing with a high pH Syrah clone at Eisele Vineyard by ramping down irrigation later in the season to reduce potassium uptake.

They conserve water and quality by using alternative methods to cool down the soils and fruit zone during our hottest days such as canopy management, spreading mulched canes to cover the soils, even misting vs. irrigating. Caleb thought that low-vigor, tightly-tucked vines aren’t always the answer to achieving balance in wine. He’d rather have a vigorous rootstock  with a “sloppier” canopy for flexibility in managing heat events. After all, he said, “vines used to be free-flowing…don’t fight it.”

It was refreshing to hear the younger generation harken back to the Napa Valley of 40-50 years ago when vigorous, drought-tolerant rootstocks and California Sprawl trellising was common. And so was dry-farming.

For more information on the educational activities of the Napa Valley Grapegrowers, visit the website www.napagrowers.org