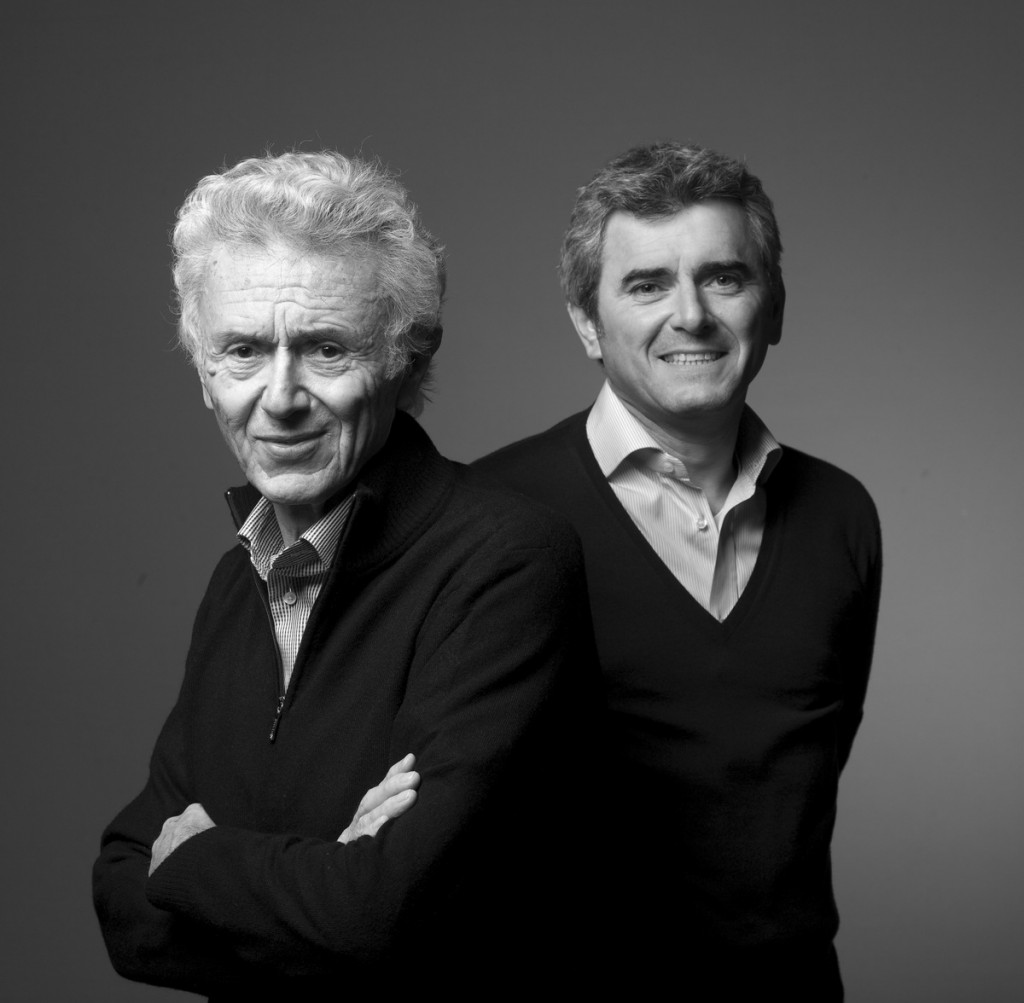 When I heard about Georges Duboeuf Wines‘ 50th anniversary coming up on September 4, I asked Franck Duboeuf if they were planning a huge celebration. No, he shrugged, not really. I was surprised that the company that created Beaujolais markets around the world with hyped-up Beaujolais Nouveau release parties every third Thursday in November would not take the occasion to celebrate their own longevity. But then I met the man behind the brand, Georges Duboeuf. He dispelled all the preconceptions I had about the brand, and of Beaujolais itself.

Unlike the personality of the exuberant wine and the slick images of him sporting natty suits and driving expensive cars, Georges Duboeuf is the antithesis of all that these represent. He’s soft-spoken but intense, wiry and fast-moving, with a humbleness that is truly striking. After having the privilege of sitting down with him for a couple of hours at his home in northern Beaujolais this past June, I realized that his immense success can be traced back to his hard-scrabble youth growing up on a farm in, of all places, Bourgogne, and the core, deeply-ingrained values he learnt there: relentless work, honor and continuity.

It all began in Pouilly-Fuisse

I’d always assumed that Georges Duboeuf included the Macon wines of Bourgogne in the portfolio because of its sheer proximity. There’s a dramatic difference in the terroir of course – Macon’s limestone basement vs. northern Beaujolais granite – but on the surface, the vineyards are contiguous. But that’s not the reason. Duboeuf was born in the town of Chaintre, one of the Pouilly-Fuisse villages, where his ancestors could be traced back to at least the 16th century. Peasant farming was especially memorable for Georges because his father died in 1935 when he was just 2-years-old. Along with his older brother Roger, Georges took on the heavy job of running a farm and vineyard at a very early age.

The Duboeuf brothers took pride in producing quality Pouilly-Fuisse, keeping the yields low and harvesting in small baskets when everyone else used rusty pails at the time. Their hard work and drive for quality may have stemmed from a determination to keep the farm intact after their father died. Rudolph Chelminski described the motivation well in his book about Duboeuf “I’ll Drink to That” (Gotham, NY) saying that “the only thing that a peasant hates more than not getting a piece of land he covets is losing a piece he already owns.”

His First Sales Were to Michelin Star Chefs

During his youth, Georges said, the Macon was dominated by about 100 negociants, wine merchants who bought grapes or wines from small growers like Duboeuf, finished the wine and marketed the blends under their own labels. The quality of the Duboeuf brothers’ wines would get lost in these big blends. Georges took such pride in the quality of the wines that as early as 16, he told his brother that they should bottle their own wines and sell direct.

That day came in 1951 when he was 18 years old. He just hopped on a bike with a couple bottles of wine in his bag and rode to Le Chapon Fin, a two-star Michelin restaurant, where his youthful confidence (or ignorance) and the quality of wines won over the chef, Paul Blanc. This relationship would prove pivotal as word of mouth spread among the important French chef network and he soon was selling to none other than chef Paul Bocuse, then to influential US importer Alexis Lichine, by the age of 22. His close friendship with 3-star Michelin chefs Bocuse and Paul’s son Georges Blanc remains strong to this day.

A Customer-Driven and Trend-Setting Marketer

Duboeuf expanded from Pouilly-Fuisse to red wines quickly, as the chefs and Lichine told Duboeuf that they wanted red wines too. His reputation on the line, Duboeuf scoured high and low to nearby Beaujolais red wine country to source the best wines. So he tasted and he tasted until he developed a palate, and more importantly, a memory of the tasting, that few can match to this day. To satisfy Lichine’s demand for domaine-bottled wine from these small growers who had previously only sold their grapes or unfinished wines to negociants, Duboeuf devised a crude mobile bottling line, earning himself a newly established designation as a “custom-bottler.”

One day, still in his mid-20s, he noticed that a certain chef wasn’t buying as much as he used to and found out that the chef’s customers liked the wines packaged in shapely Provence bottles. The FF 500,000 cost of having a special mold made for such bottles was out of his reach, but a local village counselor, Mr. Victor Vermorel, surprised him one day with a check. Duboeuf would hold the design patent on his newly created bottle, called pot Beaujolais.

While Duboeuf developed an excellent reputation sourcing Beaujolais for restaurants and for Lichine, he was still not among the powerful negociants in the area. But a day came when he was 30 years old, that a local negociant Pierre Crozet was retiring and selling the business. Duboeuf did not have the millions it would take to buy the business, but he did have a valuable asset that he knew another powerful negociant coveted: the pot Beaujolais bottle. Duboeuf sold the design patent to Charles Piat for FF 6 million, allowing him to acquire Crozet’s negociant business in 1964.

By 1970, Beaujolais Nouveau had caught on with the Parisien cafe crowd and demand soared, reaching 100,000 HL for the first time. And what was chic in Paris, like haute couture, spread fast around the world. This demand coincided with the rising Nouvelle Cuisine movement which emphasized the new, the fresh, the a la minute, just like Beaujolais. Duboeuf was perfectly placed to take advantage of the demand. Becoming a negociant had put him in a different league, expanding his options for financing which facilitated rapid growth. His ongoing relationships with influential chefs, whose stars were also rising, and with Lichine, opened markets for Duboeuf wines in export markets in North America and Asia. 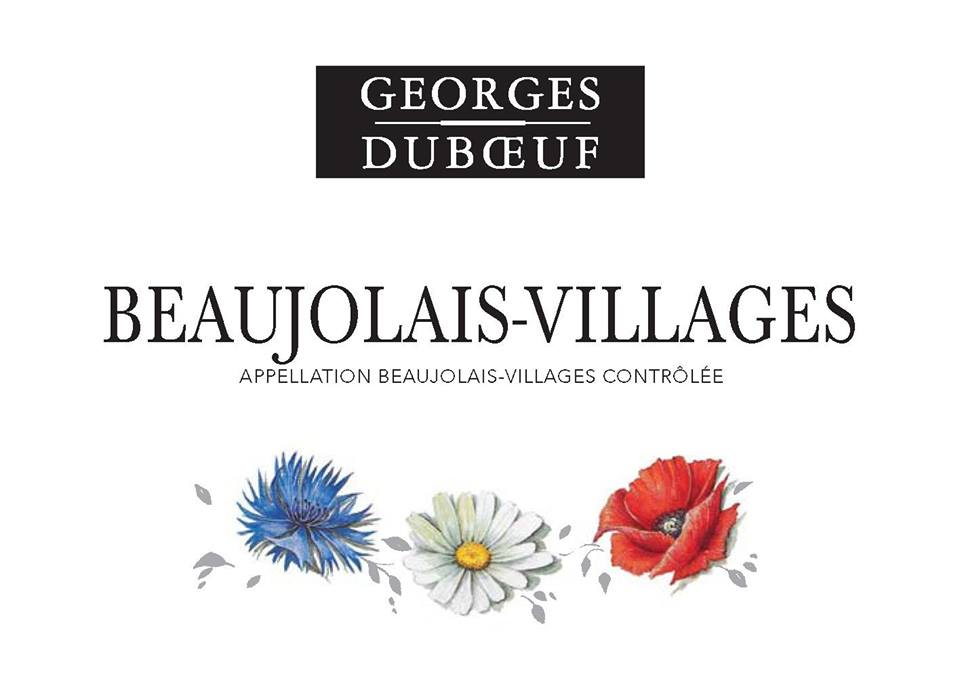 Duboeuf, in fact, was marketing aggressively in export markets a couple of decades before his French counterparts finally caught on, and used New World packaging to boot, such as the eye-popping and colorful flower labels he commercialized as early as 1970.

The Man Behind the Brand

Georges Duboeuf doesn’t need to work anymore but he still actively runs the business with his son Franck with a relentless drive for quality. When I saw this tireless man run around with such purpose during our time there, I thought of something that the writer Jasper Morris once said about the Bourguignons in The World of Fine Wine: “Burgundians – from the boy next door to the aristocrat in the big house – are effectively peasant farmers. They see themselves as tenants for life of their family domaines rather than owners of a business that is theirs to dispose of…”. I think this desire for continuity is but one of the reasons why the quality has never flagged at Vins Georges Duboeuf and why the business has thrived for 50 years and running.