Australia is one of the most underrated major wine regions in the US in part, I think, because of a simple lack of marketing and limited supply of their top-end wines.  I’m familiar with some of Australia’s  distinctive wines having visited Mount Mary, Jasper Hill, Paringa, Yarra Yering and more in Victoria alone, but their availability here is slim and none, and vintner presence through trade tastings in the important SF Bay Area market is just as rare.

So I was thrilled to have the opportunity last month to taste wines with Paul Lapsley, Chief Winemaker for Accolade Wines which represents some of Australia’s oldest and most revered brands like Hardys.   Celebrating its 160th anniversary, it’s clear that Hardys isn’t resting on its laurels but forging ahead in exciting new directions and this time, they want everyone to know about it!

In a comprehensive tasting, we explored a range of wines from their widely available Nottage Hill brand, their new William Hardy line and their top-end Eileen Hardy wines from multiple vintages.  The biggest takeaways were the Eileen Hardy wines, a brand established 27 years ago but rarely seen here in the US, and more wines in the portfolio incorporating cool climate grapes from exciting newer regions such as Tasmania and Frankland River. 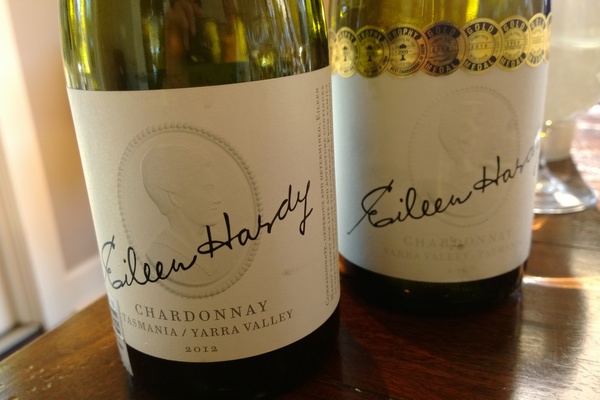 Lapsley brought older and younger wines to show their vintage character and evolution, in the case of their flagship Eileen Hardy Chardonnay, a 2008 and 2012.  Another interesting aspect of the wines was the variation in blend, the 2008 consisting of 70% Yarra Valley fruit and 30% Tasmania, while the 2012 was 60% Tasmania and 40% Yarra Valley.  Australia is distinctive in its historic blending between regions, and Thomas Hardy in 1865 was one of the first to do it.  Lapsley said that while Australian winemakers are doing more single-vineyard wines, including themselves, his overarching philosophy is to make the best wine possible which in the case of these Chardonnay, are the blends.

I loved the Eileen Hardy Chardonnays, classic fresh and medium-bodied wines from cool climate regions.  The grapes are hand-picked, whole cluster-pressed, barrel-fermented with native yeasts and malo used skillfully according to the vintage.  The 2008 had lemony citrus fruit with hints of toast and hazelnuts while the much cooler 2012 expressed more white peach and melon fruit in a very well-balanced, creamy wine. 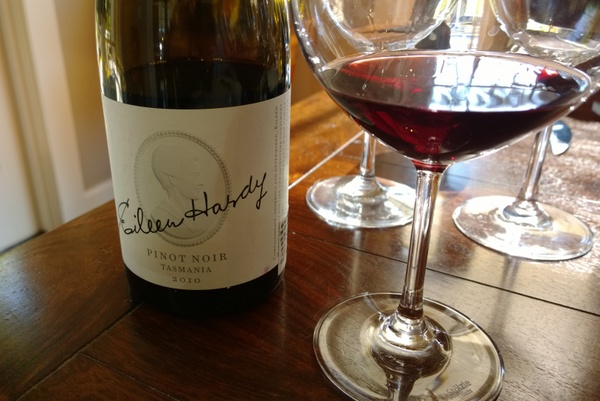 A Full Range of Iconic Shiraz 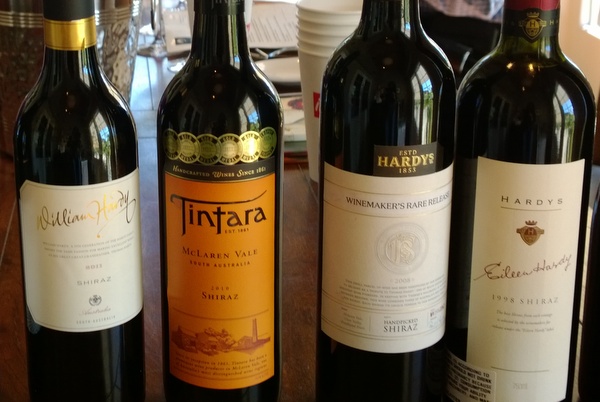 Hardys 150+ years’ expertise in Shiraz is clear in the range of wines we tasted including the new 2011 William Hardy Shiraz ($17).  I loved this wine.  The majority of grapes comes from the classic and home-based McLaren Vale region but the addition of cooler climate grapes from Frankland River in Western Australia and a bit from Clare Valley really shines through to make this Shiraz fresher and more savory to my palate.  Pairing it with my grilled salmon really made the fruit pop.

The Eileen Hardy Shiraz is a “classified” wine according the Langton’s Auction House.  This 4-tier classification, revised every five years since 1990, represents Australia’s greatest wines based on market parameters.  As of the 2010, there were only 123 total wines and the Eileen Hardy Shiraz from McLaren Vale is one of the 32 wines ranked as “Outstanding”, a position justified by the 1998 vintage we tasted, still opaque to the core, earthy with concentrated dark plum and cherry fruit, notes of cocoa, licorice and characteristic mint which gave such lift to the wine.

But herein lies the rub.  The Eileen Hardy wines are not really available here in the US, which I think is self-limiting.  The trade needs product to sell, and a story to tell.  The greater the range, the newer the brands (in the US) and hotter the wine regions, the better.

The Future Is Theirs

The tasting was such a revelation and I hope to see more of Lapsley as well as other Australian winemakers visit San Francisco in the future to market their own brands.  Lapsley indicated that in the last decade when the portfolio was owned by publicly-held Constellation Brands, Australian wines were adversely affected by unfavorable exchange rates, oversupply and devastating droughts which affected the bottom line, and corporate marketing resources.  Having been sold to a private Australian investment firm in 2011, they can now take charge of their destiny.

But are you going to export the “good stuff” as well as the premium wines I asked Lapsley to which he was noncomittal.  He said generally that the market in Australia is difficult, with the retail duopoly of Coles and Woolworths as strong as ever and growing.  Well, I said, “aren’t exports the answer then?” referring to their high-end wines and a strategy of building-out the brand from the top down, not from the bottom up.