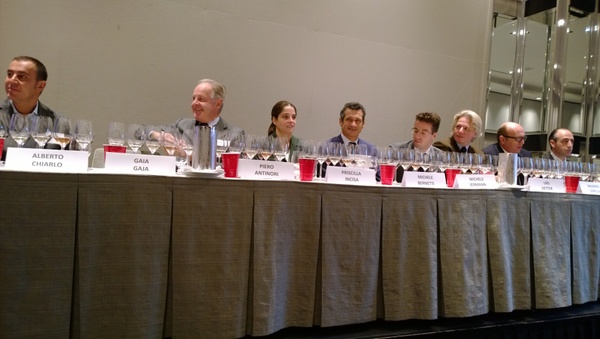 Passion for Italian doesn’t describe the rapt attention of the trade audience at the Grandi Marchi tasting last month , though no one would blame us for being star-struck at the imposing line-up of speakers.  Instead, it describes the passion of Italy’s greatest producers for their own uniquely Italian grapes, and their efforts to improve, revive and communicate them to the world.

Returning To Its Roots

With a history dating back 26 generations to the heart of Renaissance Florence, the Marchese Piero Antinori could spend more time looking backward than forward but the Grandi Marchi always seek to improve.  Antinori led a revolution in Chianti Classico in the 1970s when he began to add a small amount of Cabernet Sauvignon to his Sangiovese-based Tignanello with the objective of making a better, more complete wine.  By the late 1980s, as the Chianti Classico Consortium began a formal viticultural “Project 2000” to seek the best Sangiovese clones, Antinori’s team was already well underway experimenting at their estates with planting density, pruning, soil management and selections of Sangiovese clones that would yield greater concentration of fruit in this naturally vigorous vine, and finer tannin quality.

They have been so successful with the quality of Sangiovese grapes that Antinori thinks the percent of Cabernet Sauvignon in the iconic Tignanello, currently 15%, can be reduced.  Given the reputation of Tignanello as an established, industry-changing global brand, I was very impressed with his willingness to transition an already great wine, to a truly Italian wine.  Antinori wines are imported by Ste. Michelle Wine Estates.

Masi Agricola is another Great House who improved upon the local wines to create the first Supervenetian Campofiorin, first in 1964 by refining the technique of enriching a classic Valpolicella red wine by double-fermenting it with leftover Amarone della Valpolicella lees (ripasso), then in the 1980s, going beyond ripasso by double-fermenting the wine with whole, semi-dried grapes that would otherwise go into an Amarone.  They also modernized the grape drying technique (appassimento) to create clean, fruit-driven wines.

I wrote about Masi’s respect for typicite in the local wines, and for reviving local grape varieties such as the Oseleta grape, in this earlier post.  At the SF tasting, I was delighted to see the 100% Oseleta 2006 Osar Rosso del Veronese IGT (~ €45) featured in the tasting because it showed that the Grandi Marchi are not defined by single wines such as Masi’s Campofiorin or Costasera Amarone, but by their leadership, innovation and quest for perfection.

When I tasted this wine for the first time in 2010, winemaker Andrea Dal Cin described ancient Oseleta as a thick-skinned, small-berried and small-clustered grape with extremely low yields of 45 kilos vs. 70+ for other grape varieties.  It can produce a massive 40-42 grams of dry extract in the wines needing “seven years for it to be drinkable”.  The 2006 we tasted in SF was mind-bending, a dark, powerful wine with great balance, integrated tannins and long finish, even better than I remembered of the 2003.  Masi Agricola wines are imported by Kobrand Wine & Spirits

Up until the 1960s, the powerful Nebbiolo wines from Barolo and Barbaresco were often over-extracted and aged too long in large, old vats, leaving tell-tale notes of oxidation or volatile acidity.  Angelo Gaja changed the perceptions of those wines when he became the first winemaker to experiment with temperature-controlled fermentation, shorter macerations and aging in small oak barriques to create cleaner, more balanced wines.

Now the fifth generation GAJA, named Gaia, is also changing perceptions of Barbaresco wines.  She said that Barbaresco’s perfumed, ethereal expression is “one of its biggest achievements, but also its biggest challenge” in that consumers and the trade often simplify these wines as feminine, “not big enough or ageable enough” as Barolo which has a more powerful, earthy and masculine image.  Gaia wants people to know these wines as “ethereal, not feminine…with a distinct, less is more” quality compared to Barolo.  Even then, “Barbaresco’s beauty belies its power”, particularly those from Gaja’s 14 estate vineyards which are on the best, south-facing slopes in the historic Barbaresco zone.  Their cru vineyards such as Sori San Lorenzo produce some of the most powerful, full-bodied and concentrated wines in the region.  To reinforce her message, she brought the 2010 Gaja Barbaresco ($220), a blend of fruit from 14 estate vineyards, showing both the beauty and the power of the wine.  GAJA wines are imported by Terlato Wines International.

All 19 of the Grandi Marchi wines were incredible.  To learn more about these wines, check the website www.istitutograndimarchi.it.  Photo credits, Antinori.it, facebook.com/MasiWineExperience