Don’t tell Managing Director Valerie Pajotin that Vin de France are mere “table wines”, even though technically, that’s what they are.  For Valerie and a contingent of her colleagues from Anivin – the trade group for Vin de France – these wines have the potential to become a global force majeure, and they made a good case for it at a presentation to the media and trade last month in SF.

Table wines are the most basic category of wines made in France and the least regulated compared to Vins de Pays (30% of total) and the top tier of Appellation d’Origine Controllee wines (45%).  The big difference as of 2009 is that winemakers now have freedom to use all the  modern techniques that New World winemakers have enjoyed for decades, creating a more level playing field to produce modern, branded wines for an international market.  The US promotion of Vin de France now is driven by the more recent approval of vintage date labeling on the bottle which wasn’t allowed before, but is so important for marketing to New World consumers.

Dominant, but trailing behind in entry-level wines 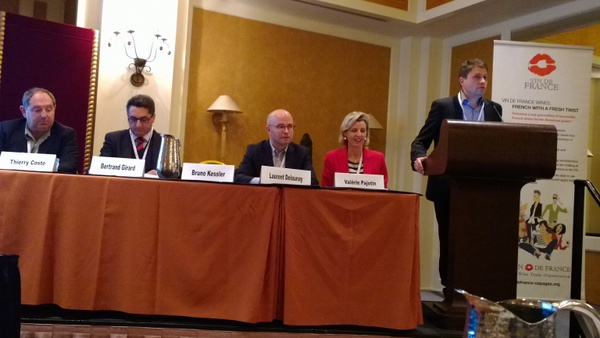 France is the world’s largest vineyard with about two million total acres, with the world’s largest production capacity.  And even with this sheer size, average yields in France are still half that of other countries.  Yet they’re trailing in export markets in the high volume category of $8-$12 wines.  Bertrand Girard, President of Val d’Orbieu a major cooperative, said that 30 years ago, French wines in the ₤5 category represented about half of all wines in the UK, now it’s down to just 10-15%.  Traveling in the US, he’s also noticed the a lack of French wines in the $5-10 category, seeing perhaps 2-3 bottles for every 100.  “It’s time to change.”

To be clear, much of Vin de France wine is bulk wine sourced from all over France, but the French are masters at blending.  They historically “own” the world’s most popular noble grape varieties of Merlot (280,600 acres), Syrah (163,700 acres), Cabernet Sauvignon (127,000 acres) and Chardonnay (116,000 acres), et al.  But even with the credentials of growing these noble varietals and making more of these wines longer than anyone else, they’re not resting their laurels solely on making classic single-varietal wines.

Laurent Delaunay, President and winemaker of Badet Clement & Co in Burgundy, makes the “New Vin de France”, wines blended with traditional and non-traditional grape varieties and marketed in fun, eye-catching ways that are totally French.  For example, his Patisserie du Vin 2012 Chardonnay-Muscat was one of my favorites that night in concept, labeling and quality/price ratio.   This line of wines draws its inspirations from classic French desserts like apple Tarte Tatin (hence Patisserie).  The wine harkened to the dessert vaguely, I liked it more because of the purity of fruit and fine balance, surprising to me given the SRP of $8.99-9.99 and the fact that there is actually about 10 g/l residual sugar in the wine.  These are not production-line wines, Delaunay uses a little American Oak and lees stirring for a touch of creaminess in the wine.  Message to Delaunay:  ever hear of the Cronut?

Catching the World by Surprise

Girard said that one of the ways Vin de France is going to differentiate itself from other inexpensive global branded wines is not by competing in the crowded field of classic varietal wines but by “chasing the smaller international grape varieties and surprising the consumer”.  Bruno Kessler, President of Anivin de France and winemaker of Grand Sud Vin, echoed the thought saying the reputation of Vin de France wines may very well rest on interesting blends using niche grapes.

But beyond that, Kessler said, Vin de France is not just selling easy-to-understand, affordable wines, they’re selling the French way of life.  If that’s the case, watch out world!