At a recent sake tasting at the Hotel Monaco in San Francisco, Sake Samurai Timothy Sullivan told us we really shouldn’t call sake a wine “a sake is a sake”.  Still, it’s hard for a Wine Muse not to taste sake like a wine and by doing so, I could really appreciate these sakes even more in terms of flavor, quality craftsmanship, long tradition and yes, terroir.

My favorite sakes at the tasting presented by the Japan External Trade Association (Jetro) were the pure rice sakes indicated by the word junmai on the label, like Junmai, Junmai Ginjo and Junmai Daiginjo in order of increasing milling rate.  The more the rice is polished of its outer layers of proteins and fats to its starchy core, the more refined and aromatic the sake.  But that doesn’t mean that a straight Junmai is not delicious, it’s just a more full-bodied, savory style.  That’s because sake goes through more transformations than wine, with an additional enzymatic process using koji fungi that converts the starches to sugars (so the yeast can ferment them) and the proteins to amino acids that contribute to savoriness or umami.  More than 100 varieties of amino acids are produced during this process, more amino acids than wine with more of naturally-occurring glutamates.  Other sakes without the junmai designation have a little bit of distilled alcohol added for aroma and mouthfeel and according to Sullivan, is a more recent development beginning during WWII.

Sake brewers will tell you about the quality of rice, water and cold climate because they all contribute to the taste.  Sake rice is different than culinary rice in that it is large-grained and ideally more starchy than protein-rich rices which gives eating rice its savoriness.  A couple of the popular varieties of sake rice are Yamada-nishiki and Omachi, which are grown in many parts of Japan; however, more brewers are sourcing rice locally to support farmers, control quality and to reflect regional flavor.

The water hardness also makes a distinct difference in the body of the sake, softer water leading to a smoother, more feminine sake while those made with hard water being drier.  According to the Japan Sake Brewers Association, most water in Japan in soft, but there are areas like Kobe and Ishikawa that use hard water.  The minerals in hard water stimulate enzymatic action and proliferation of koji and yeasts, leading to more vigorous fermentation and drier, fuller-bodied sakes with length.

Cold temperatures during production influences quality, as I found out, because sake – especially traditional method sake – is subject to the same good and bad lactic acid bacteria as wine.  In sake’s case, the undesirable bacteria are called hiochi-kin and cold temperatures suppress it.  Sake made in the slower, traditional manner such as yamahai allow the good natural lactic acid bacteria aspergillus oryzae to develop early in production, leading to greater overall complexity and richness.

Tokubee Masuda is the 14th generation President of Masuda Tokubee Brewery, established in 1675 in the culinary and historical capital of Kyoto.  His forebears began making sake during the Tokugawa feudal period and the centuries of experience shows in the purity and finesse of their sakes.  Under their TSUKINO KATSURA brand, I liked the “Yanagi” Junmai Gingo, a dry sake with a very clean and subtle aroma of peaches, smooth body and dry finish.

I expected the brewery to be traditional but in fact they’re very innovative, having created the first sparkling sake in 1966.  The “Iwai” Junmai Daiginjo unfiltered (aka nigori-style) sake is made with local Iwai rice that is farmed organically.  In fact, Tsukino Katsura grows their own organic rice.

Most sake is kept in neutral containers and sold and consumed young.  I’ve always wondered why this was so and what aged sake would taste like.  Tsukino Katsura, as it turns out, makes a small amount of these aged sakes called koshu.  In fact, they have Junmai Daiginjo sake that has been aging since 1966.  They are being stored in 20L (equiv to 1,200 bottles each) ceramic vessels.  Unfortunately, Masuda-san didn’t bring any with him, but he said it tasted like an old Madeira or Sherry, very nutty and spicy.  Given that the koshu is nearing the 50 year mark, he says they will do a special bottling of this.

I can’t say that I’ve ever searched for terroir in sake, but when I tasted the sakes of Kanaya Syuzouten in Ishikawa province, it just leapt out of the glass.  Their YAMAHAI brand “Yoshibe” Junmai sake was very dry, fresh and mineral, with a long finish.  Just as estate fruit and native yeasts and bacteria give terroir to wines, this sake was made with local Ishikawa rice and native bacteria, adding complexity to the sake. 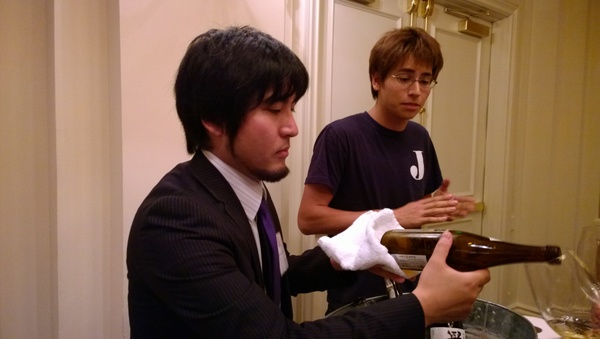 Without even knowing where Ishikawa province was, I asked Hidenori Kanaya if the brewery were near the ocean.  The taste of the ocean was clear and immediate in the TAKASAGO brand Junmai “Okoshu” style sake, a dry sake made even more complex and earthy with aging since 1995.  Ishikawa province lies on the western coast, by the Japan Sea.  Most of their sakes are dry he said because the locals like it that way but I also learned later that the hardness of water could also contribute to the dry style.  He said a local specialty is ama ebi (delicate sweet shrimp), which is a commonly served raw on sushi.  The shrimp would be a perfect pairing with their style of sake.

From the north of Japan, I liked the Junmai from HANAHARU (or spring flowers).  The sake had a clean and soft floral scent, with a wonderful richness and depth.  Technically, it’s semi-dry but it tasted dry because of its fine balance.  Hanaharu is located in cold Aizu, Fukushima province – about 300 km from the coast – where they have been brewing sake for 300 years using local Aizu rice.

How to buy sake

Knowing what to buy is a challenge given that sake is labeled prominently in Japanese characters.  That’s why Sullivan says to focus on the overall packaging.  As you can see above, there doesn’t seem to be any regulation on bottle shapes, colors or font (character) size.  My recommendations for brewers is to simplify the BRAND name to one or two words in English and place that brand name prominently on the label.  I would also simplify the dryness terminology to “Dry”, “Semi-Dry” or “Sweet” rather than the numeric sake-meter system, and put that on the front label too.

In the meantime, I would get to know general styles, for example a Junmai Daigingo being a more refined, aromatic sake vs. a straight Junmai, which would be fuller-bodied and complex.  Also, understand regional styles, for example, areas with hard water like Kobe and Ishikawa producing more dry styles, and those provinces from inland areas that historically required more salt to preserve foods preferring sweeter styles to balance the foods.

Check out Timothy Sullivan’s website Urban Sake.  It’s the site that compelled the Japan Sake Brewers Association to confer upon him the distinguished title of Sake Samurai.