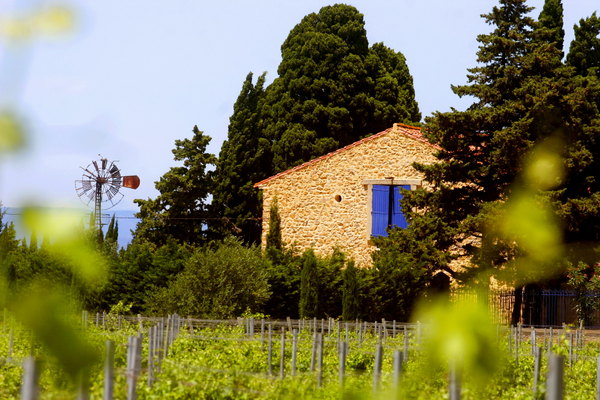 Gerard Bertrand clarified to me that in his opinion, grape varieties are tertiary to the character of the wine, after terroir and climate, which meant don’t get hung up on Grenache, Syrah and Mourvedre (aka GSM) blends.  Being a son of Corbieres, he would defend the quality of the often maligned Carignan which grows widely here on very old and dry-farmed vines.  It is so expressive of this dry and rugged southern appellation – as it is for all the appellations on both sides of the Pyrenees such as Priorat in Spain –  that regulations here permit a high percent of Carignan in the blend, up to 50%.

In any case, the Languedoc is not about a few grapes, but many grapes.  He demonstrated the region’s overall diversity by bringing a range of appellation wines from sparkling cremant from the cooler western and mountainous Limoux, to zingy and lemony Picpoul on the coast, to sweet Rivesaltes from the far south of Roussillon.  The reds included classic wines from Corbieres, Minervois, Saint-Chinian, Faugeres and Fitou. 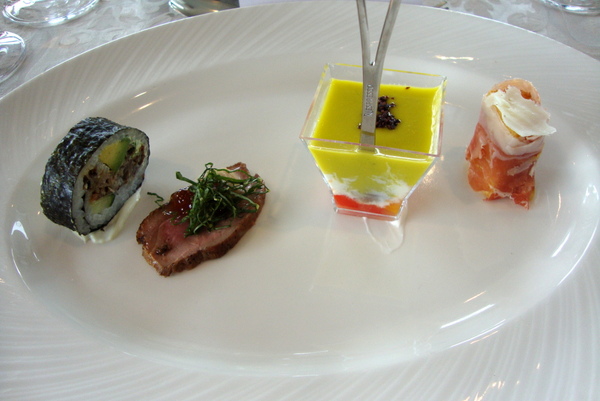 With these mini-bites, we tasted the versatility of a sparkling rose – with salty food, like the Serrano Ham Wrapped Crispy Polenta, Truffle Cheese and Parsley or with the freshness of Heirloom Tomatoes with Burrata Cheese, Basil Cocktail and Pulverized Olives.  It paired beautifully with the Dungeness Crab sushi with a hit of wasabi.  The fruitiness of the rose complemented the Duck  Breast with Fig Jam while the bright acid cut the richness.

Despite the wide range of grape varieties in the Languedoc, it’s still about the reds, and the signature appellations in my mind for distinctive personality and consistent quality are Corbieres and Minervois.

Corbieres is the largest appellation in the Languedoc and quite diverse in terroir with vineyards growing from the Mediterranean up into the mountains and soils characterized by shists, limestones and sandstones that cover every geological epoch.   There are 11 distinct terroirs in Corbieres, but it is Corbieres Boutenac which became a “Cru” in 2005.  Per Bertrand, Carignan can constitute up to 65% of the blend here.

Bertrand’s La Forge Corbieres Boutenac AOP is a perfect example of the Boutenac “Cru”, powerful, intense wines with minerality you can taste, extracted from 110-year old Carignan vines eking out about 22 hl/ha.  The stony, silex pebbles in the vineyard soils contribute to the wine’s flinty notes.   These concentrated and structured wines are ageworthy, and the opportunity to taste an older 2005 at lunch proved the case, with its complex, savory and meaty notes pairing head-on with the Colorado Rack of Lamb with Chanterelle Mushrooms. 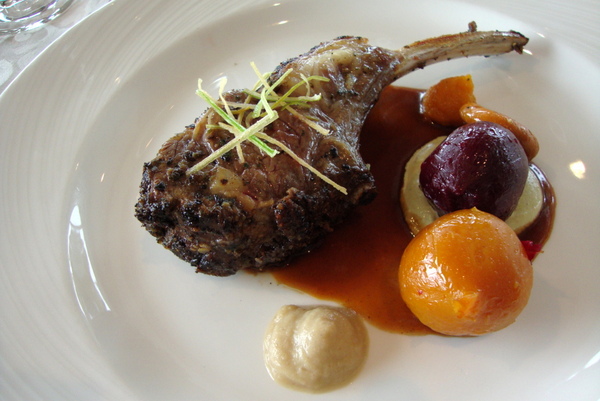 In contrast to Corbieres and Carignan, Minervois, north of Corbieres in the foothills of the Black Mountains, is all about Syrah.  Beautiful, elegant and refined Syrah.  The character and quality of wines here earned La Liviniere the first “Cru” AOP in 1999 and drew high quality winemakers like Jean-Michel Caze of Bordeaux and Anne Gros of Burgundy to the region, although Anne also uses a lot of century-old Carignan plus Cinsault and Grenache.  There’s something about the higher elevations, cool winds from the mountain and southerly aspects of these of limestone terraces that give Syrah deep perfume, color and fruit concentration.

Bertrand’s 2009 Minervois La Liviniere is such a wine, with touches of minerality, spiciness and garrigue woody herbs that I just loved.  The wines, like all Crus, evolve into rich, complex wines as we experienced at lunch with the 2001 vintage.

So are these classic controlled appellations aka AOP the future of the Languedoc?  Not in and of themselves.