Americans love the clean, crisp and fruity Pinot Grigios from Northern Italy.  They’re a great value and it’s really hard to find a bad bottle in the bunch.  So when I opened a bottle recently and took a sip, expecting to taste the refreshing but predictable wine, I almost fell off my chair.  I immediately grabbed the bottle to take a closer look at the region and producer.  The wine I tasted from Attems was completely different than any other Pinot Grigio I’d had from northern Italy with exquisite weight, piercing fruit, loads of extract and the tiniest hint of smokiness – not too much, just enough to catch my attention.

This Pinot Grigio was from the Collio (aka Collio Goriziano) region of Friuli Venezia Giulia in the northeast of Italy.  Collio borders Slovenia, which in itself was  intriguing to me, since I recently discovered the wines of Slovenia and how interconnected they are with this part of Italy and Austria.  Attems’ Pinot Grigio vineyards are near the town of Gorizia, in some areas mere meters away from the Slovenia border.  Gorizia reflects the crossroads of the former Venetian, Austrian and Slavic empires in its food, architecture and languages. 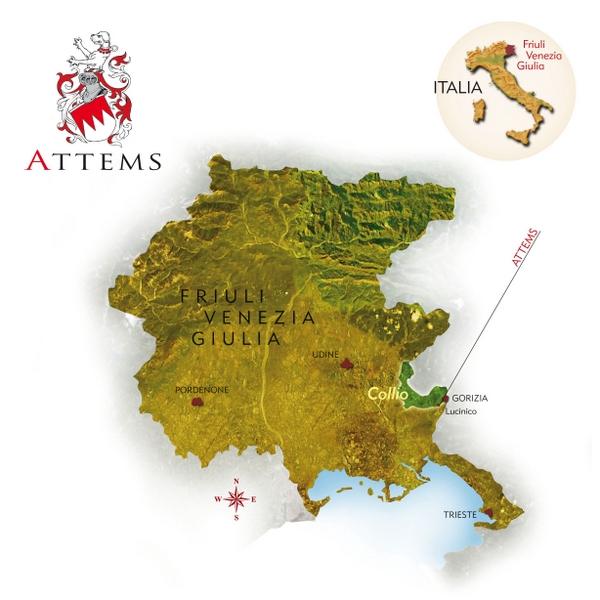 Being a good student of wine, I knew the wines of Collio were among the highest quality in the region, and their white wines among the best in all of Italy.  But I didn’t know why.  It does have excellent ponca marly and sandstone soils with brilliant sun and warmth from the Adriatic to the south, and cool nights from the Alps to the north.  But I didn’t know about its noble history, which gave impetus to its quality winemaking.

Since the Middle Ages, the wines of Collio were appreciated by the noble classes throughout Europe, no doubt facilitated by Collio’s location in the path of trade routes connecting the East and West.  This mild, beautiful location of rolling hills (hence, colli and Collio) was also the Mediterranean playground for the Hapsburgs and by the 18th century, wines were regularly sent to Vienna, a capital of the Austro-Hungarian Empire.

The Counts of Attems were a big part of this history going back to the 12th century, both as winegrowers and as aristocrats, with some members becoming Counts of the Holy Roman Empire in the 17th.  It’s not surprising that Count Douglas von Attems would befriend the Marchesi de’ Frescobaldi in their youth at the University of Florence with more than 16 centuries of winemaking between the two families.  The Frescobaldis, seeking high quality white wines to add to their portfolio, invested in Attems more than a decade ago and acquired the remaining shares last year.  It was their first and only acquisition outside of Tuscany.

But getting back to the wine.  This isn’t your typical Northern Italian Pinot Grigio, picked early, pressed quickly and fermented at cool temperatures in stainless steel.  These grapes go through about six hours of skin contact depending on vintage, with those grown in clay soils getting more contact according to Lamberto Frescobaldi.  The wine is fermented in both stainless steel and barriques for freshness with mouthfeel, and aged in a mix of SS and new oak (toasted) which imparts nuance and elegance.

The wines are imported by Folio Wines in Napa.   www.foliowine.com