At a Greek wines luncheon last week at Prospect restaurant in SF, respected retailer Darrell Corti of Corti Brothers stood up, got everyone’s attention and pronounced “this is the beginning of a Greek invasion of Greek varieties in California.”  And then it went downhill from there.  You see, I was hoping he was going to say something profound about Greek wine imports potentially booming because the native varieties – like the white assyrtiko and red agiorgitiko – are so unique in taste and so expressive of their terroir.

Instead, Corti began talking about how Greek grapes were first introduced to UC Davis in 1949 and that new clones of assyrtiko and moschofilero were released late last year for commercial propogation by UC Davis’ Foundation Plant Services.  He went on to say that these grapes, which grow so well in the very dry, Mediterranean climate of Greece, would grow perfectly in our hot Central Valley.  “Never mind about the [lack of] volcanic soil.”  Did he really say that?

Assyrtiko is Greece’s signature white grape that grows in pure volcanic soils on the beautiful island of Santorini.  There’s something about  the lack of irrigation and organic matter, and abundance of mineral-rich pumace that give Santorini wines lots of structure, high acidity and minerality.  Maybe its due to their very old age – on average 65 years – or growing on own rootstock since Phylloxera can’t survive without clay matter.  Whatever the case, the taste of Santorini can’t be duplicated anywhere else, according to winemaker Yiannis Paraskevopoulos of Gaia Wines.

Wines made from assyrtiko grown on the island of Santorini retain their high acidity with full body.  pH ranges from 2.85-3.00,  fairly low for grapes grown at this latitude of 36 degrees (warmer than Napa Valley).  The dry extract is about 17-18 g/l, leading many to describe Santorini, “red wine without color.”  But Yiannis said, once they took the vines off the island, their chemistry changed completely, their character altered.   I presume assyrtiko would perform the same in our Central Valley, becoming hot, flabby wines devoid of the refreshing, minerally taste evocative of the Aegean sea.

I thank Darrell Corti for helping me appreciate Greek wines from Greece, more than ever before.

Assyrtiko wines from Santorini have restrained citrusy flavors, high acidity, minerality and structure, and is typically unoaked, making it a great companion with food.  Here are some pairings of the Sigalas Santorini 2011 with dishes from Nancy Oake’s Prospect Restaurant in SF. 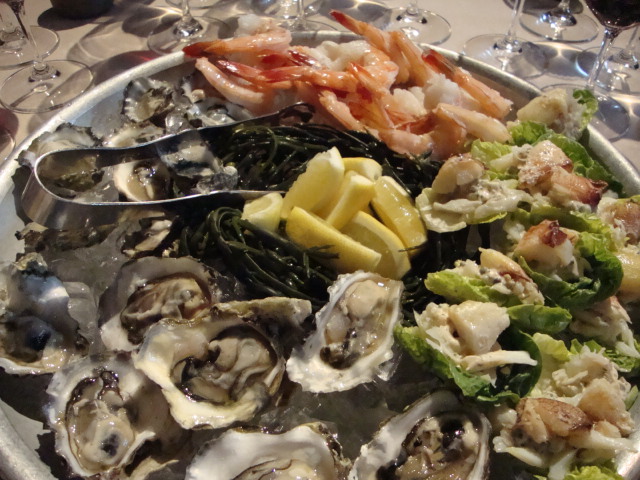 “If it grows with it, it goes with it.”  Raw seafood and Santorini are a natural match. 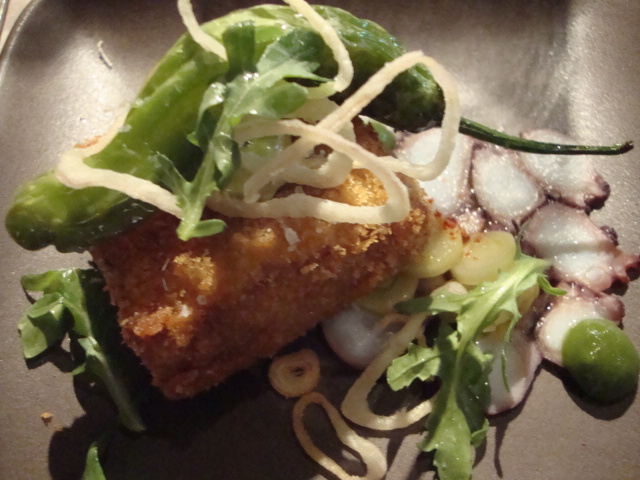 Crispy pork trotter and shaved Mediterranean octopus terrine with green garlic aioli, pickled green garlic, shishito and espelette pepper.  The acidity in the wine cut the richness in the fried pork belly and made the peppers sing.

btw, every dish at Prospect was just de-lish including the Liberty Duck, Storm Hill Beef and desserts, but one would expect that of Nancy Oakes, 2012 James Beard winner for Outstanding Restaurant for Boulevard.  300 Spear Street, SF.  www.prospectsf.com