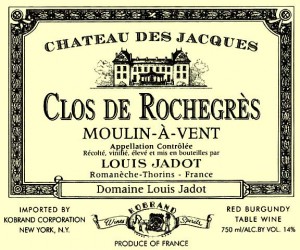 Americans are appreciating Beaujolais more than ever for its fresh, fruit-driven and lower alcohol red wines at an attractive average price of $9.  And consumers are discovering Beaujolais beyond the tutti-frutti “Nouveau” style with basic Beaujolais now representing 49% of U.S. sales vs. 28% for Nouveau.  The remainder are top of line Beaujolais-Villages which sells for around $13 and the Beaujolais Crus averaging $17.  These are tremendous values given the high cost of mandatory hand-harvesting – the only appellation outside of Champagne to require this – and low authorized yields for this classic region that is administratively part of Burgundy.  The region is mountainous and the vineyards primarily on slopes, making it unsuitable for mechanical viticulture.

The best values come from Beaujolais-Villages and the 10 Beaujolais Crus from the northern, more mountainous part of Beaujolais with its high elevation, steep vineyards of sandy and granitic soils. The Beaujolais Crus have the finest terroir with high elevations preserving freshness and south-facing vineyards maximizing sun and ripeness.  The vineyards are on poor, well-draining granite and schist soils yielding small grapes of great concentration.  They range in style, from the more elegant, floral Fleurie to the more powerful Morgon and Moulin-a-Vent.

The best Crus are produced in the traditional manner, fermented in open vats with natural yeasts, punching down for more extraction and aging in oak, adding to the wines’ greater complexity and longevity.  These are wines that Beaujolais Cru producers say can easily age 10 years or more.  The Crus from the 2009 vintage in particular, the best vintage since 2005 and 1976, could age 30-40-50 years, according Jean Bourjade, Delegue General from the Beaujolais Wine Council.  All the “Cru du Beaujolais” as one might see on the label can opt to label their wines “Bourgogne Rouge”, red Burgundy (except for the newest Cru Regnie), even though it is made with the red gamay grape.

And like great Burgundies, the Beaujolais Villages and Crus pair with the most sophisticated dishes, as Wine Director Rajat Parr demonstrated at a recent tasting of Beaujolais and Asian fusion cuisine at Michael Mina’s Burgundy-inspired RN74 in San Francisco.  The first course of sautéed pork belly prepared with honshimeji mushrooms, leeks, ginger and barrel-aged tamari was saturated with umami.  The exuberant fruit of the 2009 DuBoeuf Beaujolais-Villages stood up to the deep, earthy flavors in the dish while the crisp acidity cut through the richness of the pork belly.  The second course quail was roasted to mouth-watering perfection instead of grilled, per Parr, to preserve the delicacy of the dish, with the fragrant and elegant flavors of chanterelles, caramelized onion, hint of cardamom and burnt orange pairing beautifully with the finesse of the aromatic 2009 Raousset “Grill Midi” Fleurie.  The rich braised beef short ribs prepared with bold flavors of sour cherry, star anise and Szechwan pepper was matched by the concentrated fruit and structure of the 2009 Chateau des Jacques “Clos de Rochegres” Moulin-a-Vent and the 2009 Maison Louis Tete “Les Charmeuse” Morgon.

So for holiday entertaining, and for a few extra dollars, I’ll be reaching for the 2009 Cru over the Nouveau this year!