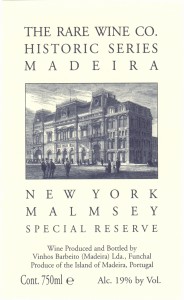 One of the producers that impressed me at a recent Madeira tasting in San Francisco was Vinhos Barbeito.  Achieving quality in fortified sweet wines is not so easy.  If one doesn’t have fine balance of the alcohol, acidity and sweetness, the wine will taste “hot”, cloying or flabby.  The Barbeito wines were none of these.  I spoke with family member and winemaker Ricardo Freitas on their philosophy on quality and how they achieve it.  By European standards, Barbeito is relatively young, established only in 1946 by Ricardo’s grandfather Mario Barbeito de Vasconcelos who began by making small lot handcrafted Madeira.  After venturing into the bulk business in the 1970’s and 1980’s, the family decided in 1991 to focus again on making high quality, traditional Madeira and instated Ricardo as winemaker.  In the brief decades of their existence, Barbeito has risen in reputation and today is one of seven commercial producers of Madeira.

Quality begins in the vineyards.  Freitas has been organically farming Tinta Negra at high elevations with excellent results.  Other producers might not incur the higher costs of organically growing the ubiquitous Tinta Negra Mole which is the basis for most generic Madeira, but Freitas really believes in its potential as a high quality grape.  He harkens back to his quality-minded grandfather who used Tinta Negra exclusively.  The potential for high quality is in part based on the high extract of Tinta Negra, which Freitas teases out gently using modern mechanical foot treaders (robotic lagares) such as those used in Port.  Freitas has been making a single harvest Madeira based on Tinta Negra since 1996.

Freitas ages fine Madeira in wood casks in naturally heated lofts (the quality canteiro method).  For younger Madeira using direct heat via estufagem, Freitas doesn’t use systems heated by coils.  He says that to achieve an average wine temperature of 45-50 degrees celsius, the coil must be heated to 80 degrees, burning the wine around it and leading to burnt sugar flavors.  Instead, he uses isothermal stainless steel tanks which are wrapped with thermal jackets that gently and homogenously heat the wine.

Barbeito’s lofts face North, allowing cool winds to pass through open doors at night.  Freitas says that the wines need a little thermal shock to keep the aromas and freshness alive.  He compares it to someone who lays out in the sun all day, is lethargic, and then is refreshed when he goes out at night.  Freitas, like all high quality Madeira producers, believe in using the canteiro method as one way to achieve balance in the wines.  He says that wines aged via canteiro have higher acidity vs. estufagem due to concentration from barrel ageing.  The subtle difference in acidity can make the alcohol in estufagem wines stick out a little more than those aged by canteiro.

The wines that we tasted in San Francisco included the Barbeito Historic Series Madeira that is made for Rare Wine Co. in Sonoma.  They are varietal wines of 15-20 years of age that have about 15% of 40-60 year old Tinta Negra wines added to give extra aged character without the higher price.  The “historic series” honors Madeira’s great tradition in America from colonial times to the 19th century and are named after important ports of call, Savannah, Boston, New York and Charleston.  All the wines were aged by the canteiro method and all are $46.50 from Rare Wine Co.

The wines are also available through Spanish Table and select retailers and restaurants.