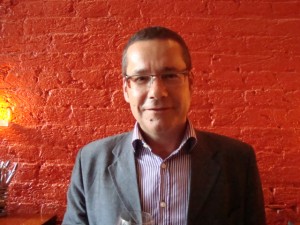 High expression, or “alta expresion” is a termed used in Rioja for new wave red Rioja, but in the northwest of Spain, winemaker Emilio Rodriguez of Bodegas Terras Gauda seeks ultimate expression of the heirloom whites of Rias Baixas and reds of Bierzo. Combine his wines with the tapas of Gerald Hirigoyen’s Bocadillos Restaurant, and one experiences the authentic flavors of Spain the way they are meant to be.

Rias Baixas is the only exclusively white wine appellation in Spain located in the northwest region of Galicia. Because of its cool, oceanside location, the whites made primarily of the albarino grape are typically light bodied and crisp wines for everyday enjoyment. But Terras Gauda seeks the best expression of the wines, from terroir to clonal selection, winemaking and quality control. Terras Gauda has earned a reputation for being a leader in research and development in Rias Baixas, working with the Spanish National Research Council since 2002, and winning the 2009 Research Award from the Royal Academy of Science in Galega for the advancement of quality and character of Rias Baixas wines. Terras Gauda’s clonal research on the albarino variety began in 1992 with 115 clones, since narrowed down to five selections being cultivated for their aromatic uniqueness, lower malic acid production and disease resistance in this humid climate, among other factors. Terras Gauda was also the first winery in the region to isolate and patent a strain of native yeast selected for aromatic quality, producing richer mouthfeel when the wines are aged on the lees in stainless steel and consistent fermentation to dryness which Rodriguez says is critical for purity of expression. They are also conducting viticultural and winemaking studies on a rare heirloom white grape native to the O Rosal sub-region called caino which Rodriguez considers a high quality variety for its body, extract and ability to “absorb” terroir. The 50 acres they have preserved represent 95% of world plantings.

The Terras Gauda Rias Baixas Abadia de San Campio 2009 (22,000 cases, $20) is 100% albarino from high elevation vineyards in the southernmost sub-zone of O Rosal, across the Mino River from Portugal. The wine is fresh with aromatic intensity and purity of ripe lemon and juicy peach flavors. This wine paired perfectly with the grilled prawns with lemon confit and crispy garlic as well as the light snapper ceviche with thai chile and crisp asian pears. The flagship Terras Gauda O Rosal 2009 (90,000 cases, $24) is a blend of 70% albarino, 20% loureiro and 10% caino. Loureiro adds soft floral scents and the low-yielding caino adds body and extract to the blend. Coming from lower altitude, warmer vineyards, the fuller-bodied wine has a subtle floral nose and broader apple and peach fruit with a hint of minerality on the finish. Ageing on the lees contributes further richness to the wine, making it an ideal partner for the corn fritters with bits of chorizo sausage, manchego cheese and tomatillo sauce, and the roast squash with browned butter.

Emilio Rodriguez is also consulting winemaker to sister winery Pittacum in Bierzo. Bierzo is across the border from Galicia to the east in the relatively warmer climate of Castilla y Leon. Bierzo is most known for its reds made of mencia, another ancient, heirloom variety of Spain which is increasing in popularity abroad for its fruity charm. Some have compared it to cabernet franc, but it has none of cab franc’s bell pepper flavors, is lower in acidity and has more plummy character than cab franc’s red currant. Mencia’s opaque color and rich tannins is due not to the thickness of skins says Rodriguez, but due to the grape’s high polyphenol content, requiring careful maceration. All the mencia come from old vines of at least 50 years of age.

The Pittacum Bierzo 2006 (15,000 cases, $24) is 100% mencia. Rodriguez aged the wine in a mix of American and French oak to achieve a creamier texture and more vanilla scents which complement the ripe blackberry fruit with hints of licorice and chocolate. The Pittacum Bierzo Aurea 2006 (1,250 cases, $52) come from century-old vines and it shows in this full-bodied wine with deep violet and plum aromas, concentrated black fruit and subtle spice. It has rich but sweet tannins, balanced acidity and fine length. The oak is well-integrated with the wine having gone through malolactic ferment in barrel and then aged for 14 months in French oak. The fresher Bierzo paired very well with the monterey squid with red mojo, rich ink sauce and salty serrano ham, also the succulent Niman Ranch flatiron steak steeped in bright vinegary and herbal chimichurri sauce. The more concentrated Aurea paired well with the strong flavored lamb albondigas (meatballs!) with almonds, spicy tomato and salty feta dish. I also thought the Aurea paired the best with the spicy hot house-made chorizo with peppers and onions as the moderate acidity in the wine did not accentuate the chilis. And the steak-cut spicy patatas bravas served with romesco sauce? Goes with everything.

We wished we could have tasted all the appetizing small plates at Bocadillos but we were more than full with the fairly generous portions of tapas including the artisanal cheese plate and the wines. All the more reason to return!

Terras Gauda wines are available at select retailers and restaurants.