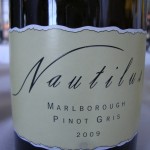 New Zealand is a new World wine region with a cool climate.  There are over 77,000 acres of vineyards in New Zealand with 2009 production of 205 million liters.  Because New Zealand has a relatively small population, over half of the wines are exported.  New Zealand covers a distance of 1,000 miles from 34th to the 47th parallel across two islands, with the South Island being generally cooler and drier than the North Island.  On the South Island, New Zealand grows  the majority of its signature aromatic white grape varieties such as sauvignon blanc, pinot gris and riesling, and classic cool climate grapes of chardonnay and pinot noir.  On the warmer North Island, New Zealand is increasingly becoming known for its merlot, cabernet sauvignon and syrah (together about 10% of New Zealand plantings), particularly those from Hawkes Bay.  New Zealand wines have the body and lifted fruit aromas of the New World, with the fresh acidity of the Old World.

Sauvignon blanc is New Zealand’s most widely planted grape with over 30,000 acres, over 90% of it from Marlborough in the South Island.  Sauvignon blanc is New Zealand’s flagship wine distributed widely throughout the world and is recognized for its pungeant gooseberry, lime and bell pepper aromas.  But it is pinot noir and the other aromatic whites that have grown the fastest and have found welcome markets in the US, UK and Australia.

Pinot noir is now New Zealand’s 2nd most widely planted grape  after sauvignon blanc, with over 70% from the South Island districts of Marlborough and Central Otago.  Exports have grown about 350% between 2004 and 2008 with the UK, US and Australia accounting for 73% market share.  Pinot noir from these regions have a purity of raspberry and strawberry fruit, bright acidity and silky tannins.  At a recent tasting of new releases, I found the following to be well-made, good examples of this style:

Plantings of the aromatic whites riesling, pinot gris and gewurztraminer have grown 230% since 2000, with exports tripling between 2004 and 2008.  Notably, pinot gris is the third most widely planted white after sauvignon blanc and chardonnay, and leads riesling and gewurtztraminer in exports.  My favorite riesling at the recent New Zealand tasting was the 2009 Spy Valley Riesling from Marlborough ($20) with vibrant lime and tangerine flavors, fine extract and long, mineral finish.  My favorite pinot gris was the 2009 Nautilus Pinot Gris, Marlborough ($18.99), dry with layers of concentrated peach and grapefruit flavors, rich mouthfeel and balanced acidity.

Examples of well-made, classic chardonnay are to be found around the world, but New Zealand chardonnay has a citrus aspect I find particularly appealing.  The 2008 Alana Estate Chardonnay, Martinborough ($34.99) was irresistable with a hint of lees and vanilla on the nose and depth of lemond curd and tangerine flavors on the palate.   Full-bodied but fresh, with rich mouthfeel and long finish.