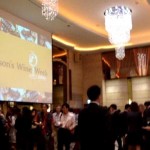 Hong Kong is a small island dependent on imported food and beverages.  The Hong Kongese have the cultural backgrounds and languages of both the Chinese and the British, are sophisticated, well-educated, prosperous and open to experimentation.  In a global market that is in net over-supply, the Hong Kongese have particular demands that make them ideal consumers in today’s global wine market.

The Hong Konger loves red wine and the major producing countries make a lot of it.  75-80% of wine consumed is red.  While the health benefits of red wine are well-known, the ethnic Chinese take it to another level.  They are culturally health-driven according to Manda Parker of Berry Bros. in Hong Kong – witness the proliferation of herbal remedy shops in any Chinese neighborhood.  Jeannie Cho Lee, MW says that some Chinese when told about the health benefits of red wine will actually drink it as ‘medicine’.   As a tea-drinking culture, they are comfortable with the tannic structure of red wines and they love the color because it represents good luck and happiness.  They seek out safe and hygienic products and hold suppliers like the U.S. in high regard due to our strict consumer safety and disclosure laws.

They currently buy most of their wine in bottle vs. in bulk, the latter of which has very low profit margins.  Major producing countries like Spain, Australia and the U.S. sell a portion of their excess wines as bulk wines which are often blended and bottled in the destination country under the buyer’s own label.  Countries like Australia can sell bottled wine in Hong Kong and receive double the average price per liter they receive in export markets.

There is great upside in developing the consumer through education – still in its infancy but facilitated by a large bilingual population – and through food and wine pairing.   The potential is huge.