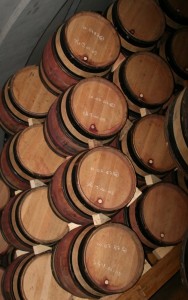 Ageing of wine in wood adds complexity to wine and is influenced by the type of wood used, its origin, how it was cured, age of wood,  length of ageing and  size of container.  Another important element in the winemaker’s recipe book is the toasting level.  Toasting of wood in new barrels is done at the time the barrel is made, when the staves are being shaped over an oak fire.  Toasting can enhance or create flavors from the breakdown of carbohydrate, phenolic or fatty compounds in wood, resulting in aromas such as spice, nutty, espresso, vanilla and coconut.  There are standard toasting levels in the wine trade, such as light, medium, medium plus and heavy toast all imparting varying degrees of aromas.  As a gauge, a “light” toast might be achieved in five minutes @ 120-180 celsius; “medium” with ten minutes @ 200 celsius and “high” with 15 minutes @225 celsius.  In reality, coopers produce slightly different toasts for a given category.  So how do winemakers deal with this variability to produce a consistent wine showing the best of the fruit and terroir?

Some winemakers use a wide variety of coopers and blend away the differences.  In the Northern Rhone, Philippe Guigal and his father visited many coopers from small to large over the years and found that one cooper’s “light” toast was equivalent to another’s “medium” toast and in fact, on the edge of yet another’s “heavy” toast!  They decided about five years ago to make their own barrels.  Philippe said that when they hired their current cooper, the first thing they did was to take his watch away – so that he would not toast according to time.  They trained him to use his nose to get the right aromas for their wines which is so critical to the style of Guigal’s traditional, long-aged Cote-Rotie.  At Delas Freres, winemaker Jacques Granges decided to use a single cooper because he wants the variations in his wines to reflect only terroir.