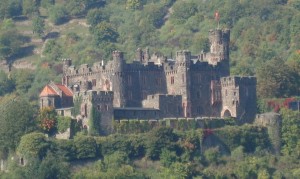 Taxes being one of them.  Upon visiting the Rheingau, one will notice all the magnificent castles on the hillsides along the river.  These were owned by the most influential Dukes from the 12th to 15th centuries.  For centuries, the Rheingau River was the major route for transporting wines from the city of Mainz in the Rheingau downriver to Cologne, which was an important trading center for wines.  The Dukes participated in this commerce by exacting tolls for all ships that passed along this route, which effectively doubled the cost of wines, including those of Kloster Eberbach which was a large producer of wine.

The Cistercians of Kloster Eberbach, being of enterprising nature, began to make allowances for burying non-clerics in the Chapel – the non-clerics of the Duke kind, that is.  In exchange for burial in the Chapel, the Dukes waived the tolls for the Kloster Eberbach which gave them an important commercial advantage.  Due to this divine recompense, by the 16th century Kloster Eberbach was the largest wine producer in Europe with 1.6MM liters of wine in stock.  This volume of wine is a gauge of the importance of wine  as a major economic force in trade at that time.