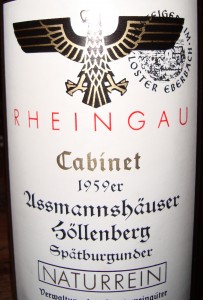 When people think of Pinot Noir, they think of Burgundy or maybe Oregon or Russian River.  Some think that pinot noir, aka Spatburgunder, from Germany is another wine region trying to commercialize on the popularity of pinot.  After all, in 1975, only 3.5% of total German vineyards was planted to Spatburgunder.  But domestic consumption trends have evolved since that time from sweeter white wines to drier reds.  In 2006, 63% of imports were red wines and, as of 2007, Germany became the 3rd largest grower of pinot noir after France and the US, with about 12,000 hectares (30,000 acres).  Major regions producing pinot noir are the relatively warmer regions of Baden and Pfalz, while high quality pinots are also made in the Ahr and the Rheingau.

Germany not only has potentially the right climate for growing pinot noir, it has a history of making fine pinot noir almost as long as Burgundy’s and far longer than riesling which was discovered only 500 years ago.  Early records show spatburgunder being made in the 9th century and being the most important wine in the 17th century.   Kloster Eberbach, the Cistercian abbey in the Rheingau, has been making pinot noir for 870 years (except during disruptions from various wars and peasant uprisings), basically since the citaux  was founded in 1136 by monks from Burgundy who presumably brought vines with them.  Kloster Eberbach continues to make pinot noir and owns 1/3 of all the vineyards in Assmanshausen, one of the highest quality and oldest villages for pinot noir in Germany.