You may not realize it yet, but you love this wine!  The U.S. is the #1 export market, by a wide margin, for the wine region Rias Baixas which is located in the far northwest of Spain by the ocean.  Rias Baixas means the “lower estuaries” because it is marked by inlets of water that extend miles from the Atlantic.  Rias Baixas is the only exclusively white wine Denominacion de Origen (regulated quality appelation) in Spain and is dominated by the white grape Albarino.  Albarino grapes produce light-bodied, crisp and faintly aromatic wines similar to those just south of the Mino River in the Vinho Verde wine region in Portugal.  In fact, driving West to Rias Baixas, one can see Vinho Verde across the river.

Rias Baixas is in the province of Galicia, whose capital is Santiago de Compostela, the destination for pilgrims on the Camino de Santiago since 950 a.d.  Because of this history, Rias Baixas is a center of hospitality.  Other equally important reasons why I love Rias Baixas are the fresh seafood, the wines and the fact that over half of the winemakers there are women.

Because of its location by the Atlantic, Rias Baixas is one of the coolest and dampest wine regions in Spain.  Average temperatures are 55-59 degrees with max summer temperatures rarely above 75 degrees vs. over 100 degrees on the meseta (plateau) in central Spain.  Rainfall is high, 45-70 inches per year, which means high risk of mildew and rot.  Most vines will be trellised on granite pergolas or “emparrados” raised 5-7 feet above the ground and 13 feet wide, to avoid moisture and allow plenty of aeration.  These cool conditions result in higher acidity, light-bodied and moderate alcohol wines of 12-12.5%.  The majority of producers use malolactic fermentation to reduce acidity, the extent to which is determined by the vintage.  Most wines are fermented and aged in stainless steel to produce a fruit-driven, early-drinking wine that is sensational with seafood. 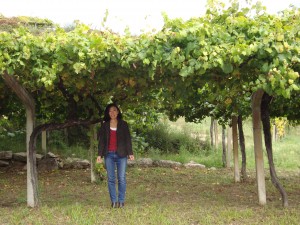